The Dream of Boris

A week after the 2016 referendum, Boris Johnson baffled the Great British Public by pulling out of the Tory leadership contest.But why, when he seemed a dead cert to win? The answer – revealed here for the first time – lies in the dystopian dream he had the night before. Allegedly.

It is 2026.The United Kingdom is no longer united; in fact, it doesn’t exist. Boris rules what’s left of England where online referendums decide everything, with the issues thrashed out nightly on EastEnders. The Caliphate threatens from north and west. An invasion force embarks in Europe. The Queen is in exile in Germany; Harry beachcombing in the South Pacific; Charles a crofter on Skye; William about to assume the mantle of King Arthur and lead the pagans of the West. All are bent on revenge. Yet most menacing of all is the figure released from the mirror of Doctor Dee in Buckingham Palace, who hounds Boris at the Bullingdon Club reunion and then pursues him into space — David, Spirit of Britain, shapeshifting from Ziggy Stardust to Major Tom. A vision that not even Boris can ignore.

Click on the link to hear Swedish Radio on Brexit books and Deceived Kingdom, with an interview with the Richard. 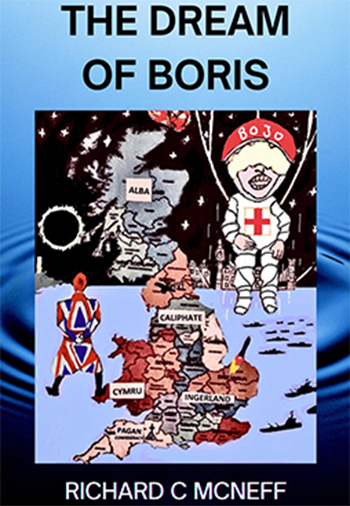 “Brilliantly written post-Brexit satire in the tradition of Swift, Voltaire and Vonnegut.”
— S.Allman

“It is – all at once – biting satire, science fiction fantasy, contemporary lampoon, surreal romp and stand-up comedy. It’ll have you cursing at the turn of history it so skilfully derides while chuckling into your post-Brexit porridge.” — Robert Nurden, journalist and author of Between Heaven and Earth.

The Dream of Boris was previously published as Deceived Kingdom, which in 2017 accurately foretold Prince Harry drinking kava in the South Pacific, “a most uncivil war”, and the elevation of Kate Hoey and Gisela Stuart to the Lords. Coincidentally, Deceived Kingdom used the same alias for Boris Johnson, “Marmaduke”, that he himself adopted for the rejected screenplay he wrote in 2015, Mission to Assyria.

Click on the link to hear Swedish Radio on Brexit books and Deceived Kingdom, with an interview with the author.